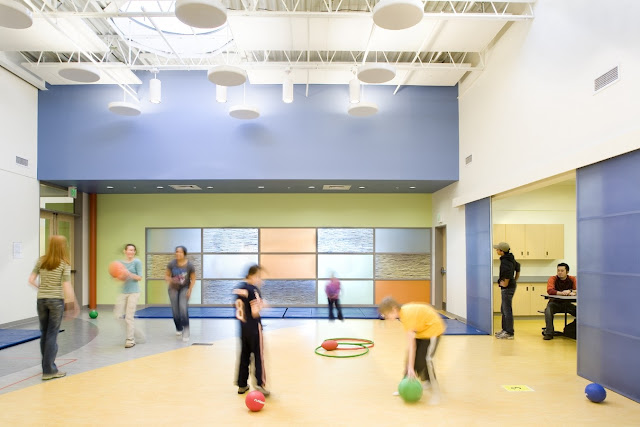 According to the Center for Disease Control, the number of students with autism is growing rapidly. From 2000 to 2014 the prevalence of autism in children has gone up from 1 in 150 to 1 in 59 due to better recognition of the condition. However, the educational system for those with autism has not caught up to the growing population. The students are often overlooked by school districts and given classrooms that are detrimental to their senses. In order to serve the needs of autistic students, new facilities need to be built and current facilities need to be adapted in order to accommodate this growing population.

To understand the specific accommodations and requirements for an autistic user, it is imperative to understand what autism is. Autism is not a single disorder, but a spectrum of closely-related disorders albeit with a shared core of symptoms. Every individual on the autism spectrum has problems to some degree with social skills, empathy, communication, and flexible behaviors. The major symptoms of autism are social communication difficulties, language disabilities, and repetitive behaviors, with many related signs and symptoms including sensory perception problems, emotional difficulties and uneven cognitive abilities. The area where architects can make the biggest impact is in designing buildings that mitigate these sensory issues.

Sensory oversensitivity varies from child to child.  It can range from mild (slight anxiety when the environment is too loud, too bright, or too chaotic) to severe, with an individual going into a screaming tantrum every time he or she is in a place such as a large, noisy supermarket. Some individuals on the spectrum are attracted to objects that move rapidly and others will avoid them. When senses are disordered, the attention and concentration that learning requires becomes difficult and in some cases, impossible. Children who spend their days fearful of people and places who, through past experience, have been overwhelmed by their senses, have little chance to relax enough to take notice of the learning opportunities being presented. This makes the teaching and learning process very difficult for the children because they have to be in an environment in which they feel safe and that they understand.

Problems with perceptual issues often determine the style of learning that will be most effective. A child with poor auditory perception may hear sounds poorly and perceive the sounds coming in and out like poor phone reception. This child is more likely to learn best with visually presented information. On the other hand, a child with visual perception problems may learn best through the auditory channel as auditory information will be easier for them to process. Some nonverbal individuals have both visual and auditory processing problems. They may learn best through their sense of touch and smell. For instance, to learn to dress they may need to be hand-over-hand “walked” through putting on socks or pouring cereal. They may learn letters and numbers best when they can touch them, and trace their shape with their hands or fingers. Representative objects rather than visual charts can be useful in helping these individuals know when it is time to transition to a new activity.  Schools need to be adaptable in order to teach students with all degrees of perception issues and be able to adapt the environment to a student’s specific needs.

Some individuals may be able to receive information, but have trouble organizing it or making sense of the information. Some individuals may be hearing words correctly, but not understanding them. Problems with organizing information affect a child’s ability to form categories that are the foundation for later concept formation. Difficulties that people on the spectrum have with multi-tasking would also fall into this category. These difficulties are highly variable and range from mild to severe depending on which brain circuits connected and which ones did not.

An autistic student's ability to learn in a traditional classroom is often compromised because of the difficulties previously described. The schools which are able to adapt to their students’ needs and offer flexible learning methods and learning environments are able to have a much greater influence on the lives of their students.

Principles of design
In order to design an appropriate learning environment for autistic students many factors need to be taken into consideration. Special attention needs to be placed on the stimulus level of spaces, when programing. Quiet spaces, such as classrooms, should be laid out far away from noisy areas such as the gym and cafeteria. By looking at common sensory problems, a series of principles can be made to use as the basis of design for an autism friendly school. These principles outline strategies to reduce distraction from excess stimuli, to determine how the building should be organized as a whole, and how the building itself should be constructed.

Acoustics
Parents and teachers ranked acoustics as the most influential feature of the sensory environment on autistic behavior. Loud noises and sounds from things such as movement and mechanical systems should be mitigated through design. In most cases the sense of calm that comes with quieter spaces encourages better behavior in students and allows them to focus on learning. Special attend should be paid to material selection to limit reflected noise.

Lighting
The use of direct fluorescent lighting should be avoided. Individuals with autism are very vulnerable to the sub-visible flicker, which can cause headaches, eyestrain, and increased repetitive behavior.  Lighting also needs to be controllable because different activities require different amounts of light. Natural light improves academic performance, relaxes students, permits better concentration, and reduces hyperactivity in children. However views to the outside and other distractions should also be controllable to prevent students from being distracted by what is happening outside, which can be done though clerestory windows or translucent glazing.

Colors and materiality
85% of autistic children see colors with far greater intensity than a neurotypical student. Because autistic individuals may have a significant increase in color differentiation, small changes in color can dramatically affect their behavior.  Grids and busy patterns should be minimized in areas that require student to focus, such as a classroom. Minimizing any offending stimuli can help improve autism spectrum students’ ability to perform successfully in the classroom.

Adaptability
Spaces should be created to permit change depending on the children’s needs and to allow the students and teachers to rearrange or subdivide the spaces as needed. Finishes, materials, and spatial organization should be able to be manipulated not only by the staff but also by students. An environment which is able to adapt and change to the user’s needs is able to perform more functionally than a room with a set purpose. The environment could also change stimulus level based on the activity, divide the space up into multiple small areas of activity, or exist as one large space. However, if the environment is too flexible an individual might live in constant fear that the environment will suddenly be changed.

Transitions
Spaces should flow as seamlessly as possible from one activity to the next and should be organized in accordance to their sensory quality rather than the typical architectural approach of functional zoning. For example instead of placing a school gym near the classrooms as they are closely related in their function and user, it would be better to place them in opposite areas with administration placed between them even though there is little programmatic relationship between those spaces. With transitions between areas of high stimulus to areas of low stimulus or from one activity space to the next, there should be a threshold space which allows the student to recalibrate their senses. Without the transition space, the shock of going from an area of low stimulus to high stimulus could trigger inappropriate or disruptive behavior from students.

Predictability
Students with ASD will often feel nervous when navigating spaces that are unfamiliar to them so the arrangement of structures should made so that they are easily understood and encourage choices as well as problem solving and discovery. The importance of legibility, imaginability, and redundant cueing come into play when those with ASD are navigating buildings. Classrooms and schools should be easy to read with clear signage, numbering, and configuration. The environment must be memorable and describable in terms of specific landmarks to create a space for students to be able to recall.

Escape Spaces/Quiet rooms
Students need spaces that provide areas of respite from the over stimulation in their environments. Having such spaces in a school has been shown to have a huge positive effect on students in a learning environment because the class and other students can often overwhelm the sensory input of an autistic individual through the stimuli that accompanies a neurotypical classroom setting. Being able to experience an outdoor environment is also important as the fresh air and nature can have a calming effect on the students. Creative outdoor areas can provide students and adults with special needs the opportunity to explore social interactions, as well as provide places for tranquility.

Safety
Children with autism occasionally have an altered sense of spatial orientation, depth perception, and general proprioception, or the ability to sense stimuli arising within the body regarding position, motion, and equilibrium. The miscommunication within the sense makes individuals with autism prone to self-injury. They are also prone to displaying aggressive behaviors and tantrums making them dangerous to themselves and others. The high frequency of those with autism demonstrating self-injury due to being unfamiliar with their environment mean precautions need to be taken to ensure that the children are being constantly looked after.  Autistic individuals also have stronger reactions to dirt, germs, and toxins, so the materials selected within an environment need to take into consideration the chemicals used to create them.

Durability
Emotional disturbance issues, such as intermittent explosive disorder or bipolar, frequently cohabitate with ASD. Due to this, there exists a need to use durable materials that not only resist the wear and tear of children, but are safe enough that they do not to cause injury to the students. The materials will also have to be easy to clean as children with ASD often have trouble with bathroom procedures and will sometimes soil themselves or vomit in class.

The principles outlined above are only a first step and merely an outline for a building. In order to make an effective learning environment the school as a whole, from the classroom to the curriculum, needs to adapt to the growing variable needs of the autistic population. Designers need to work directly with parents, teachers, and administrators to design schools that work with all parties. Schools designed specifically for students with autism have a beneficial impact not only on the students, but also on those who care for them. It is the role of the designer to balance both environmental and human factors to create spaces where students can have equal opportunities to learn, regardless of disabilities.

David Leestma, AIA is a practicing architect at Torti Gallas + Partners in Silver Spring, Maryland. He received his Master of Architecture from the University of Maryland in 2015. His research examines the impact that architecture can have on learning environments, with a specific focus on the sensory perception issues of autistic individuals. David has presented his work in multiple venues including the University of Maryland Disability Summit and the AIA | DC 3rd Annual Thesis Showcase.